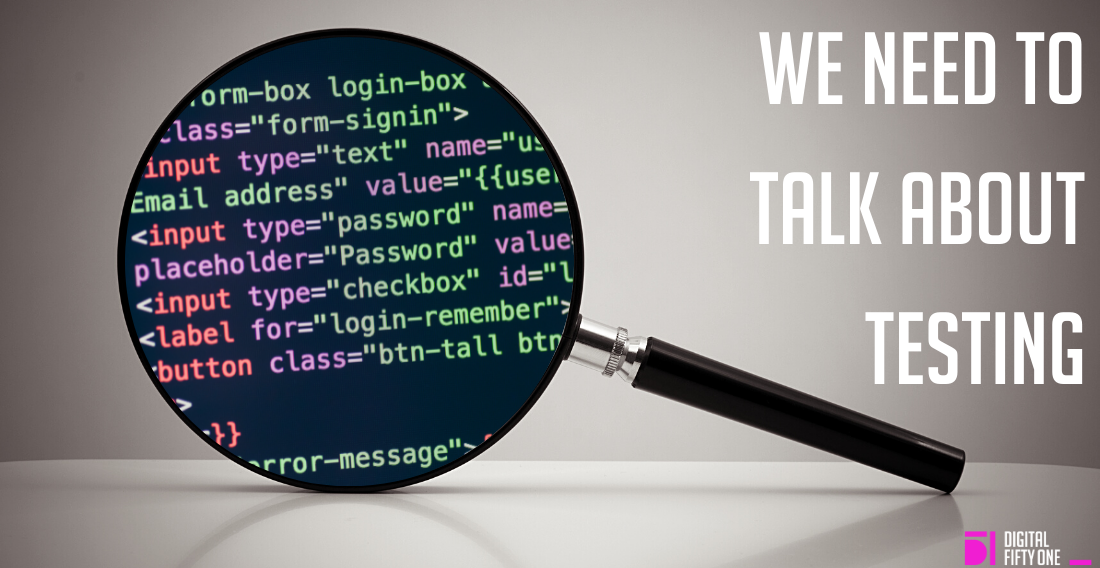 I have a secret for you. Testing has been a problem long before a global pandemic virus called Covid 19 arrived on our shores. Testing has been the default position for nearly every organisation in the world over the past 20 years and it’s impact has always been mixed.

As I say, it really is time for us to talk about testing.

I should be clear. I’m not talking about the eye watering experience of stuffing a gloried cotton bud down your throat, and then up your nose, before completing a small scale chemistry experiment in the chaos of your kitchen, whilst the family circles you. No, this is not about seeing if you end up with a blue line on C or T in the now famed Lateral Flow Test.

I am talking about testing people who want to work in your business as part of your hiring process.

To be honest I, like many people find the LFT horrific, I generally moan each time I do one and I always end up coughing and spluttering in the most dramatic fashion for 5 minutes afterwards. In reality though it’s a walk in the park compared to the testing some people are being asked to complete in order to get a new role.

Now as I say, testing has been used by nearly every company that has ever hired. Whether you be applying for a role in HR, Finance, Fork Lift Truck driving, working on the till in Sainsbury’s, or as Developer. Testing is not new.

However, and I am sure you can understand why, as you have been drawn to an article on the website of a recruitment business called Digital 51, that I would like to focus on Development testing process currently in play.

Back in the day code was at times tested by people physically writing out code on a whiteboard. I would love to see how that would be received in the new world, but it was judged testing of technical skills within development could be assessed better. This brought the introduction of ‘take home tests’ although some businesses still do live testing, although this is nowhere near as prevalent now as take home tests.

Like the aforementioned Lateral Flow Test, you get to take the modern-day Dev test home and complete it in the comfort of wherever you choose at a time that works for you.

All sounds great right? This way businesses can see your skills in action, see an output and set a specific test linked to a scenario relevant to their business. You get to do all of this in a time and place that works for you. Definitely great right?!

Well, I’m afraid it’s not great and in many cases, it’s not working and this failure of process is affecting both parties; business and candidate. Taking away from the inconsistency of setup which sees some businesses taking time to explain the tech test, what they are looking for and overall guidance compared to others just sending a WeTransfer link. There are two real areas of concern, issue with Development teasting.

Firstly, you are asking a person who is in globally high demand to a level where they can move jobs every 3 months if they so choose for a pay rise and no-one will blink. To take time out of their world and complete your tech test, with absolutely nothing in return. Even the Lateral Flow Test gives you a benefit by giving near instant feedback.

Do tech tests and asking each candidate to complete this process acknowledge backdrop of the current recruitment landscape in the world of Development?

Oh and if you are not aware there is a HUGE shortage of Developers across the UK right now. It was bad going into to 2019, Covid has blown the situation up to another level, a global pandemic level you could say.

Why should the Developer complete your tech test? For the chance of a role with you? Is that really enough right now?

The second issue is feedback. On average tests can take 3 hours, however we have seen some that take 7, SEVEN hours over multiple days. Lets not even get into the inconsistency of testing and timing, but lets definitely focus on feedback. If someone does take time to complete a technical test and ultimately not secure a role, they deserve to know why. They deserve to have some feedback in the areas they fell down, some suggested further areas of focus for them and even advice on how to improve. The Developer world, like nearly all areas of Technology is a community at the end of the day. I am currently seeing and hearing of Lead Developers, Heads of Development and even in some cases business owners who started out as Developers, not helping their coding comrades out.

On the whole Developers, certainly the ones we have the pleasure in partnering with at Digital 51 enjoy the challenge of a tech test, but lets not take advantage of them.

There are many problems in recruiting across the Development landscape at the moment of that there can be no question. However, we have to work together, we have to see this as an opportunity, and we have to communicate constantly and consistently just to stay in the game.

This article was written by Simon Brown, Founder of Digital 51. If you would like to talk about how to improve your assessment process when looking to hire, e-mail Simon on

If you can’t find something, create it.

Digital 51 was founded on FOUR key beliefs, principals, or ambitions if you will. All require context and detail, but they underpin everything we have done, and continue to do each day. These are: Being Immersed in our markets Being community focused Content, content, and more content Business Development   All FOUR are really important […]