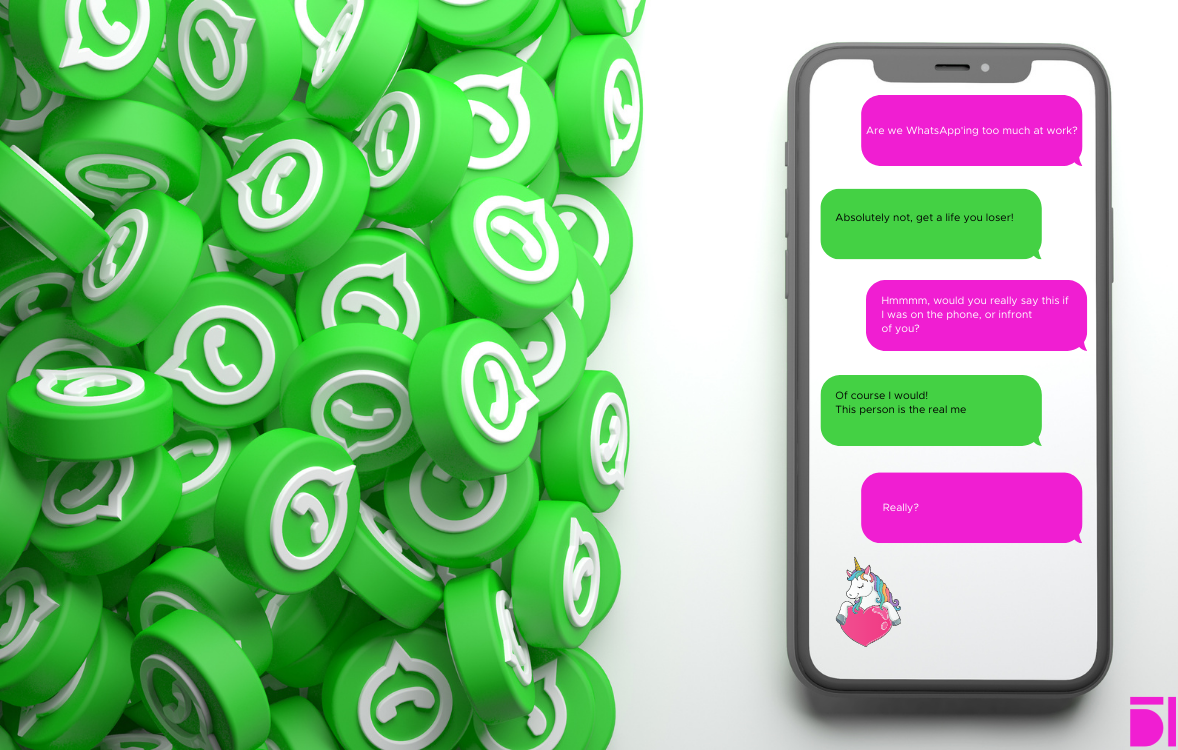 WhatsApp is something that millions of people around the world now take for granted as an easy means of communication. The social media come messaging app is still one of the top 5 downloaded apps for all Apple phones around the world. This is amazing when you think about the fact the app was first released in 2009!

WhatsApp has really caught the headlines in the past 48 hours, as it turns out a section of the Conservative party are using it for debating how, when, and if to push the Prime Minister over the edge he seems to walking so close to. It was seeing the screenshots from these WhatsApp messages, and reflecting on my own experience of WhatsApp in the workplace in 2021 that got me thinking.

Are all workplaces now fair game when it comes to WhatsAppification?

It will sound strange to many when I say I was surprised to hear a group of Tory MP’s were chatting away on a WhatsApp group about something as serious as whether to get rid of the Prime Minister or not. I mean, you could argue, why would they not? It’s one of the most used messaging apps in the world, and they need to message each other. However, I guess I was thinking about some of my own WhatsApp groups, which see me speak with my friends and family about football, family, more football, music, the occasional moan about my family, more football, oh and a whole host of random pictures. The thought that people who are ‘meant’ to be very serious, debating, and discussing really serious things on WhatsApp about their workplace caught me off guard.

Sticking with the political take on things for a minute, it turns out that MP’s are now also ‘whipped’ to vote and communicate with the media by WhatsApp. How, when, what, why!? Whipping of MP’s is without overstating things, how lots of really important issues in our country get decided. This key part of British political life is now done via WhatsApp so much that many politicians are starting to blame the approach for a lack of unity.  Why are politicians saying this is a problem? Apparently, it’s the lack of conversation driven by the ease of WhatsApp which is causing confusion and things being missed until too late. See recent 100 MP rebel vote for live example.

Right, so before this article turns into something more suited to the Spectator than a recruitment website, what has all this got to do with ‘normal work?’ Well, I’ll tell you what. During 2021, following too many years away from the frontline of recruitment, I have firmly been back on the battlefield, helping to find people who are suited to the growing needs of my ‘clients.’ Whilst I have loved every minute of working with businesses, who have entrusted me to help support them grow, I have been amazed how little phone communication there is in the natural flow of recruitment right now.

During 2021 I have experienced everything from owners of businesses making offers of employment through WhatsApp, right through to people accepting jobs, confirming they will resign, and then trying to back out of that decision. All by WhatsApp. I have also seen attempted salary negotiations, been on the receiving end of a couple of ‘late night’ messages and calls, and ended up with more details on my phone than I probably feel comfortable with. All down to the WhatsAppification of work.

Being completely honest I rebel against this approach, and whilst I will eventually cave and move into blue tick roulette if I need to, I much prefer speaking to my clients and those people I have engaged with them via a phone call. Why? Well for one there are so many horror stories out there in the recruitment and jobs market about the use of WhatsApp that I find it terrifying at times. I’m aware of people who have lost their jobs via WhatsApp, how is that even acceptable?!

Obviously the means by which we communicate has changed, I am not naive to that. The days of giving your friends or family ‘two rings’ when you get home to let them know your OK have long gone. Now a quick message when your home does the same job. Also messaging has improved the ability to operate slightly below the radar when recruiting, as a quick message to confirm an interview, is much easier to respond to, than taking a call. However, are we too reliant on this form of communication, and is it breaking down the relationship barriers which are so important when hiring, changing jobs, or finding out what the jobs market could hold for you?

Messaging is great, but it can also cause major problems if misunderstood. Plus, you have the big fingered amongst us who send a unicorn when searching for punctuation on far more WhatsApp messages than is really acceptable. Again, if you are attempting to do something really serious, like confirm an offer of employment via WhatsApp, the unicorn could really scupper that.

There is even a job board now which is purely message driven, no phone calls at all, just messages between those looking to hire, and those looking to be hired. This I see growing more popular in the Development space in particular as it ‘saves the conversation.’ Don’t get me wrong, I take my hat off to the people that have come up with this idea, but it does make me sad. It’s not sustainable.

Relationships are harnessed and built best over time, and by speaking to each other in my opinion. When working with either a business looking to grow, or someone looking for a new role, I love to know more than just where they live, what their notice period is, and how much they want to be paid. I want the context and detail of them as a person, and I would like them to know the same about me, so trust can be built up.

Can this really be done by WhatsApp?

Can true trust, knowledge and understanding of a person really happen via WhatsApp?

Is WhatsApp just an easier way to say things that don’t have as much depth, because you can’t be bothered with the conversation in the first place?

Is this really suitable for the workplace?

Personally, I am not sure the WhatsAppification of the workplace is a good thing, however I fear it’s here to stay in the short to medium term. I will play blue tick roulette moving forwards if I need to, but to be honest I don’t really like those odds, so I will also continue to call you. I promise in the long run, I am doing us both a favour!

This article was written by Simon Brown, Founder of Digital 51. To contact Simon you are probably best to avoid sending him a WhatsApp, but we know you can get him be e-mailing

It’s not just the NHS that needs a strategic plan

If you picked up any newspaper yesterday you will have read a range of articles, all based on recent reports, and statistics that claimed the NHS is facing its biggest recruitment challenge since inception. Stats that jumped out to me: Over 100,000 vacancies in the NHS that need filling right now. Over 50,000 of these […]

Mad Men: How a TV show inspired a business

It’s rare that something gets me right from the off. I am a slow burn with many things, trust needs to be built, before I decide if I like something. I am what you might call a complex character. However, this was not the case 15 years ago as I sat down to watch the […]

Stick with start-ups, they are worth it

I love a start-up, I really do. Now you could say I am biased, as I work for a business which is less than two years old, so technically a start-up. Is this just an article to show off all that is good about life at Digital 51? No, this is about the businesses me […]